As a company laptop I recently got a Dell Precision 7510 laptop with 32GB Ram and a 512Gb ssd disk. However the problem was that the diskspace was to small to store multiple VMWare’s which I have to use at the customer. So I needed to find out if an upgrade was possible and what disk it should be. I wanted the best performance so an NVMe disk was the best choice for me.

So the first I needed was finding out if the laptop supported NVMe disks for its M.2 slot that was available in the laptop. The dell US documentation said it would while other documentation said it wouldn’t. I tried to research this as best a possible and and found a forum thread about people who have it working so I decided to order a Samsung 960 EVO m.2 for my laptop.

To install it you need to remove the battery and the battery cover as can be seen in the image below: First remove the battery and then remove the screws marked below and slide the rear cover of the laptop. The M.2 ssd goes into the slot marked below: 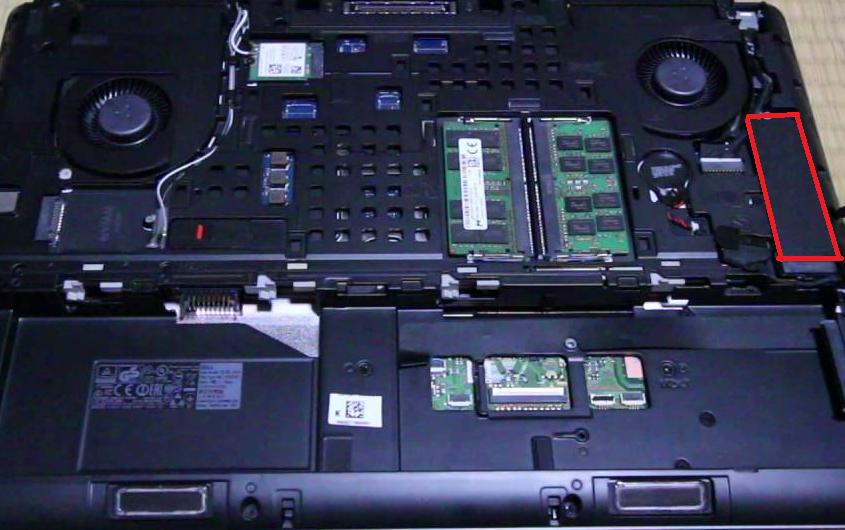 After placing the ssd and screwing it in place you can close the laptop again. Boot up and you see it listed into your bios under the System Information section. It should also be visible in Windows however on my machine it didn’t show up in device manager. After googling/bingeling for this issue I found that i needed to install the:

Intel-Rapid-Storage-Technology-Driver-and-Management software which can be found on the dell site and installed that, then it would show up in Windows 10 which was a great relief! No for the geeky stuff I used a ssd benchmark tool called As ssd for a simple benchmark.